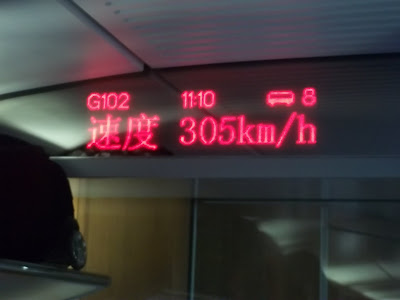 It is said in China that one must walk the Great Wall to be known as a hero. And as our guide Rogin said, the woman who does is an ‘Iron Lady’. So introducing The hero and the Iron lady 🙂 my wife and I that is! We made it; actually climbed the wall of China. We had just 8 days of vacation in China. Most of it in Shanghai and as my daughter had an old school mate that relocated back to Beijing China, I decided to surprise her with an opportunity to see her friend after 7 years! And while we are at it, why not go in ‘style’ I had read and heard of the speedy trains of China and booked a trip on one of those from Shanghai to Beijing. The Hongqiao station was almost like an airport itself, huge! These trains are fast! You notice nothing but in a short while, thanks to the neon display inside the carriage, we could see ourselves averaging more than 300 km/h throughout most of the ride. We were met at the Beijing South train terminal by my daughter’s friend and mother. Reunion..This trip to China was really amazing, as I myself met an old friend from London at a church where I sung in Shanghai( He had been living in China for more than a year unknown to me). Then the taxi. Hint: Always have your destination written in Chinese otherwise the drivers can’t really help you. A few phone calls, explanations from our Chinese friends later, and we could proceed to our service apartment as they are called here. 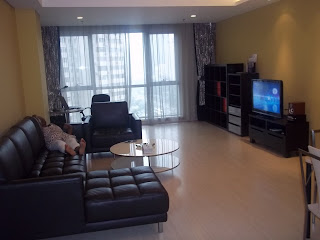 The next day we met our privately hired taxi and guide. A half day was all we had, so it was the Wall, the great wall of China. Apparently called the Long Wall of 10000 Li in real Chinese 万里长城 Wànlǐ Chángchéng and then the 2008 Olympic stadium: the bird’s nest and the cube.

The climb up the wall was dogged by our usual Chinese ‘fans’ who wanted to get on photographs with us. We were almost an attraction as well. We obliged most and made our way from tower to tower all with varying level of steepness. We had chosen the Bandaling which was one of the best preserved we were told, but also crowded at times. No problem, we came to China and want to see Chinese people. and indeed, we had our fill. 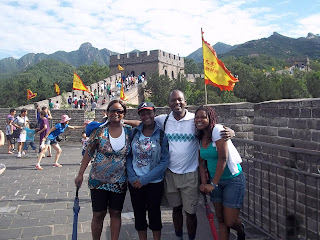 Now I have an idea of what stars have to deal with… But we made it as far as we could upwards and then made a descent. There we had to take it slow. Towards the end I saw a very tall African american and judging from their t-shirts I noticed they were from Georgetown University and told my wife, he must be a basketball-er, and indeed we saw more with similar tops. I greeted them but little did I know that the next day, this group of players would make it to papers and TV all over the world and of course YouTube for all the wrong reasons, NOT the basketball BUT the brawling that took place 10 minutes to the end of the game during their ‘friendly match with a Chinese team!

Man! Should have taken a photograph with them…

Martin Adu is a music minister, an inspirational gospel music artist based in Leiden, the … END_OF_DOCUMENT_TOKEN_TO_BE_REPLACED

Dear Readers, as the COVID lockdowns are now effectively over, I am beginning to minister live and in-person again.This month of October, I will be … END_OF_DOCUMENT_TOKEN_TO_BE_REPLACED