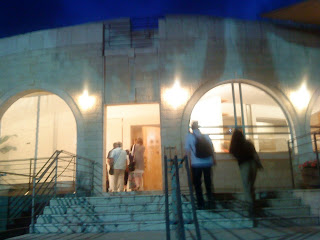 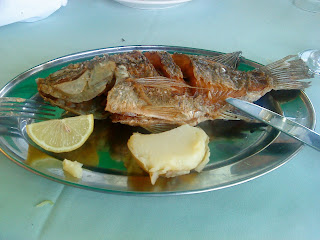 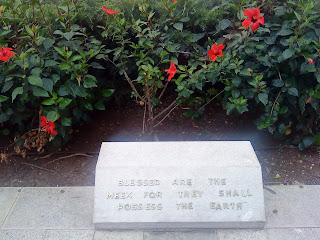 Yawn! about 5.30 am (4.30 am C.E.T in my head) the birds started chirping 3 or 4 different species and never stopped! Talk about a wake up call and the origin of the early bird. We are in the Jordan valley area and really a nature reserve. The flowers and vegetation are a feast for the eyes. Had our first breakfast and started our first journey at 8.30 on the way to Ein Gev, a resort where another group was staying. After a song a short word of welcome from Pastor Zijlstra, we moved out and headed for Capernaum where a few things took place in the bible, involving Jesus, and then moved to visit the mountain of the beatitudes where the famous blessed are the … words were said to have been spoken by Jesus to the crowd, but the fun was yet to come. After seeing quite a few places, churches and synagogues of old, which were really impressive for the stone work and the peep into history, we moved to see the Sea of Galilee and had our lunch close by. Most of us took the fish dish which featured the ‘peter fish’ quite nice. We visited Tiberias and actually got on the sea by boat like Jesus would have done! A group of about 250 on 3 big boats . On our boat, something happened that brought a tear to a few faces. The flags of the Netherlands and Israel were raised in that order AND accompanied by the national anthems. That was moving. Then our boats which all started in a staggered manner gradually came together and were placed side by side hooked by ropes. And we had a time of celebration in the middle of the sea of Galilee. I got a shock and a first in my life, being called upon to lead the people in the 3 boats in a song of celebration. Wow! We sung ‘He’s the Mighty one of Israel’ lustily with two guitars backing me and half way through got a boost as one of the Israelis on the Boat brought out a drum and followed us giving solidness to the music . Amazing. Then, Brother Hans shared a word on the storm in your life and how that with Jesus you can overcome. Then we sung again. Only to have a band on the boat called the Hava Nagilla band really get everyone dancing with a couple of songs. This is definitely a high point.

Service on the mount.
Just when I was recovering from the beautiful time we had at Galilee, we had a an early dinner and headed off to a planned service at the Mount Carmel church in Haifa. Well, this was a drive up the same Mount Carmel where the showdown took place between Elijah and the prophets of Baal. We arrived just about when the praise service started and filled the church and wow! what a feast, what a celebration!- the Israeli way. With solid music and dance. The worship leader Karen Davis was just amazing. We all from the Netherlands gave an offering to encourage the work of the church. Then I sang a special and my did the people go along with me. That set the stage nicely and Pastor Zijlstra preached in Dutch, while Brother Hans translated to English and somebody translated to Russian. At the end of his sermon, he invited a few people to be prayed for. They all got healed without exception. What a night! loads experienced healing from God. And people responded to the call to start a relationship with Jesus. At least 10 people came forward. It’s almost 1 am, time for bed.

Martin Adu is a music minister, an inspirational gospel music artist based in Leiden, the … END_OF_DOCUMENT_TOKEN_TO_BE_REPLACED

Dear Readers, as the COVID lockdowns are now effectively over, I am beginning to minister live and in-person again.This month of October, I will be … END_OF_DOCUMENT_TOKEN_TO_BE_REPLACED