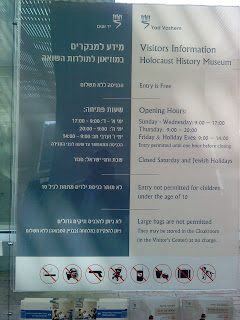 You’ve heard the stories and read about it and interestingly, some even try to deny it ever happened! Yesterday we started by visiting YAD VASHEM, which is the official momorial in Israel to the Holocaust, where 6 million Jews were killed, murdered, gassed during the 2nd world war. You could see a film collage of how life was before the unfortunate event and then the gradually progression of events that led to almost complete annihilation of a particular people, just for being different. I laboured through the winding paths and the hall of names where you looked up and saw in a spiral pictures of people who lost their lives brought it all home. You heard a sniff from practically everyone of our group that came out. By the time we then went into the Hall of remebrance where you saw the names of some on the floor, the eternal flame, now regarded as a holy place, the tap works got turned on. Couldn’t hold the tears. 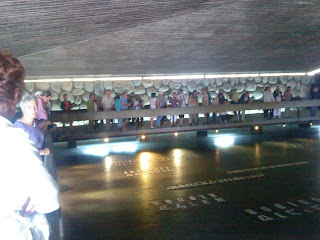 We then moved on to visit the birth place of Jesus where it all begun. This was the wierdest part of our trip for various reasons. First our guide could NOT follow us into Bethlehem. She had to be dropped before, and once we got in, another guide jumped aboard. Coming through the entrance, the reason became clear! 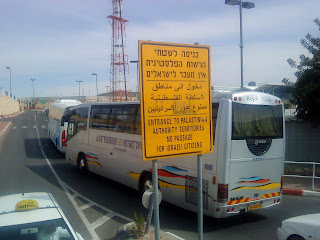 Citizens of Israel (read Israel Jews) were not welcome in Bethlehem! Well, we need to rejoice that we at least could see the place. We saw the wall of separation, but then visited the place believed to be where Jesus was born, where a church (of the nativity) now stands. Rebuild by different people, it has the Armenian, Greek Orthodox and Roman Catholic sides to it. Like our guide said, if you lived in modern day Bethlehem, you’ll get to Celebrate Christmas three times! Kid’s delight 🙂 It is an area under the Palestine government, not too much to see but then new buildings and the major attraction being the nativity square where Christmas eve is celbrated in december and the Church. 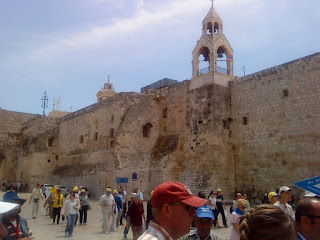 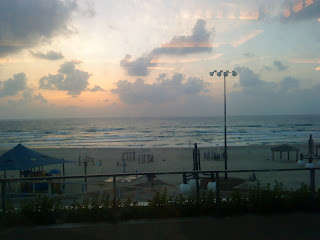 Ashdod is the fifth-largest city in Israel, located in the Southern District of the country, on the Mediterranean coast, with a population of 210,000. Ashdod is an important regional industrial centre. The Port of Ashdod is Israel’s largest port accounting for 60% of the country’s imported goods.(Wikipedia)and has a great beach! We got back quickly to the hotel to change and were on our way to Ashdod. For once this was flad land as we were used to in the Netherlands. No hills or mountains. We saw that it was the market day and man was the place theming with people. Here we had the last of the 3 planned services. First we were treated to a big dinner 3 course meal 210 of us! The service:The pastor Avi prochter said a few things. This was the first time in their history that they held a service outside their church walls, and the hall was full, well some party was going on downstairs 🙁 Secondly the mayor of ashdod would have been their but for previous engagements and sent his greetings welcoming us to the city and that they would be building resorts and new hotels to host more christians in the future! This was unheard off. Pastor Zijlstra sent a message back acknowledging the gestures. There were lots of Russian Jews and Ethiopian Jew present, all evidences of the Aliyah (return of jews from other countries to their homeland) And the service was powerfull- great music, and I was asked once again to sing a special )by the way I have literally sung a song as solo or led the group in songs every day since we came here, it is a miracle I still have a voice to sing. God has been faithfull and helped me indeed. This time I sang again the song `He is Jehovah´ Contrary to what happens when i sing this in Holland, everyone was on their feet singing along and dancing along.What a sight! Again we gave an offering to be a blessing to the work of the messianic jewish congregation and loads were headed by God. Notable and funny was seeing deaf people who got healed suddenly trying to adjust to the presence of sound again. And an invitation was made for people who will acknowledge Jesus (Yeshua) as their saviour some 15 people came out to do that. This was unheard of in Israel, as people normally do this secretely. We thank God for this breakthrough . 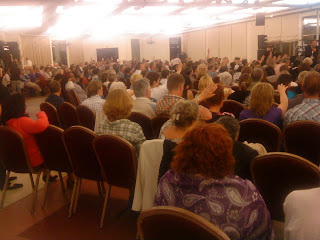 Martin Adu is a music minister, an inspirational gospel music artist based in Leiden, the … END_OF_DOCUMENT_TOKEN_TO_BE_REPLACED

Dear Readers, as the COVID lockdowns are now effectively over, I am beginning to minister live and in-person again.This month of October, I will be … END_OF_DOCUMENT_TOKEN_TO_BE_REPLACED