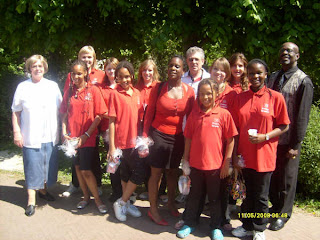 Our dear youth gospel choir was in the Life Word Christian centre in Utrecht recently to minister. It went well, but not without hiccups. They say, sometimes, it just doesn’t rain, it pours.
Almost every area had something wrong going on.. We were planning to try out running a DVD on the background while singing for the first time, but the connection to the beamer wasn’t working and took long phone calls to resolve. The Piano was configured in such a way that it was
3 – 4 tones higher, and songs were unsingable (is that a word ?) 2 different keyboards later, our Pianist Ilvio could play. Half of the group in a bus did a bit of drive around and arrived half an hour later than arranged ! How much can a man take, but we went on and sang and the people were blessed but with much less sound check as I will. Thank God for his grace. It is sufficient for us. God never promised a life without any issues but the strength to deal with them with HIM on our side. We’ve got the victory.

Martin Adu is a music minister, an inspirational gospel music artist based in Leiden, the … END_OF_DOCUMENT_TOKEN_TO_BE_REPLACED

Dear Readers, as the COVID lockdowns are now effectively over, I am beginning to minister live and in-person again.This month of October, I will be … END_OF_DOCUMENT_TOKEN_TO_BE_REPLACED